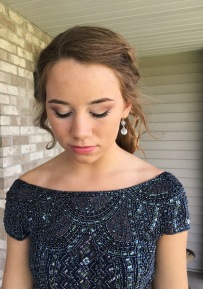 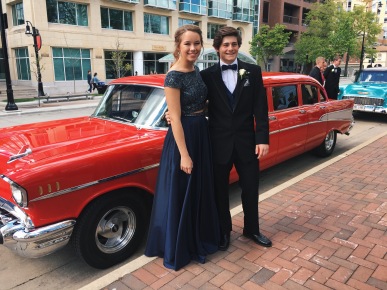 This weekend I had the opportunity (and privilege) to do my beautiful cousin’s hair and makeup for her junior prom! And let me tell you, (not to brag or anything) but I think I did a pretty kick butt job.

Now, the pressure was on considering that the high school my cousin attends only has ONE dance, their junior prom. THAT’S IT. For me, my high school career consisted of attending five different dances, picking out five different dresses, five different hairstyles, etc. As this being her only dance that she would attend at her high school, not only was it a big deal for her, but it was also a big deal for me because I wanted to make it perfect (not like I’m not always a perfectionist or anything).

As the day approached, she had been sending me ideas of the hairstyle she would like and she decided on a half up, braided style that was curled. I thought this was the perfect choice as her dress had a higher neck but a lower back. I started with adding volume to her hair by creating a small bump at the crown of her head, securing it with an elastic and then braiding the rest of that hair, securing it to the head with bobby pins. This created a base for the rest of the hairstyle as I now had something to pin the rest of the hair into as I pinned it back. With this base set, I then created two large dutch braids, one on each side, pulling apart the hair to make them even larger. I secured the end of the braids and wrapped each one around the base, securing them with bobby pins. The rest of the hairstyle was basically just playing around with the hair and seeing what looked good where. I pinned each individual curl into the base, creating a sort of effortless waterfall look that turned out amazing. I still can’t believe that I created that hairstyle myself to be honest, especially without watching any tutorials!

For her makeup, I used my normal, everyday makeup routine and used eyeshadow from my Urban Decay Naked III palette. This palette is one of my favorites as it contains an array of rose colors, something that contrasted nicely with her navy blue dress! And what better than her makeup matching her pink nails and the pink accents in her corsage as well! It couldn’t have been more perfectly planned.

I’m so excited to have been able to do this for my cousin’s special day and I had so much fun watching her get all dressed up and ready for the dance!

And if you’re wondering, yes I’m wearing heels in that picture of us together and she isn’t. Yeah, she’s that tall…